IN 2020, THE PA DEMOCRATIC PARTY HAS A PLAN TO LEAD PENNSYLVANIA BACK TO BLUE.

Our plan begins and ends with a people-powered approach to engaging voters of every background, in every county, for races at every level.

With a grassroots movement of thousands, we’ll empower more people to vote, ensure every vote’s counted fairly, and engage millions of undecided voters through one-on-one conversations.

We’re responding with the first vote-by-mail campaign in Pennsylvania history. Our focused approach will empower seniors and low-income voters to cast their ballot for fifty days before Election Day.

BIG voting changes are coming to PA starting with the #PAPrimary, including convenient mail-in voting and a longer voter registration period. Read about the changes to voting at https://t.co/1CvRWtmHai. #votesPA #ReadyToVotePA #TrustedInfo2020 pic.twitter.com/MDKa6OXqjv

Voter Education
With a digital training series and a statewide tour, we’re spreading the word about Governor Wolf’s reforms and how they make voting more accessible to all.

Mail-In Voter Canvassing
Democratic volunteers are going to knock thousands of doors in the communities most impacted by voter suppression—educating voters face-to-face and helping them request mail-in ballots.

Targeted Digital Advertising
In one of the state party’s biggest media buys to date, we’re empowering targeted voters to request a mail-in ballot with just a few clicks.

Outreach to Election Officials
We’re working with state and county election officials to make voting by mail as easy as possible. We’re also partnering with local Democrats to build the infrastructure needed to turn out mail-in voters.

GET OUT THE MAIL-IN VOTE.
Sign up for an educational webinar on voting by mail and what it could mean to voters in your community.
JOIN WEBINAR →
Or, chip into our statewide organizing fund »

State Democrats only need nine more seats to flip the PA House and four to flip the PA Senate. Plus, we know with certainty that strong local campaigns help turn out votes for races up the ballot. 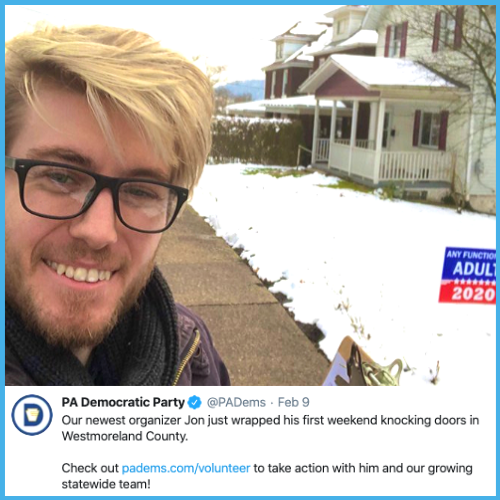 Joint Organizing & Outreach
Democrats at every level are presenting an organized front in 2020. We’re preparing our candidates and organizers to campaign at every level and for every candidate—from the presidency to the Pennsylvania House.

A Localized Communications Plan
The PA Democratic Party’s communications team is bigger now than at any point in 2016, and still growing. We’re building the bench strength to tell more local stories, host press events across the state, and provide needed support to candidates at every level.

GET INVOLVED LOCALLY.
Go to PADems.com/volunteer to find nearby events being hosted by your Democratic county party or local candidates.
FIND LOCAL EVENT →
Or, donate to fund additional organizers »

Donald Trump and the Republican Party have exposed our democracy to foreign interference and voter suppression. Our mission is not simply to win more votes, but to ensure every eligible vote is counted.

A Massive Voter Protection Team
We’re building the people-power to place attorneys and voting advocates at more polling places than ever before. Plus, a “voter support captain” will be on the ground in all sixty-seven counties on Election Day.

Voter Registration & Vote by Mail Drives
We’re engaging Pennsylvania’s most disenfranchised communities with campaigns that extend the vote to those hit hardest by voter suppression.

JOIN OUR VOTER PROTECTION TEAM.
We’ll provide training, resources, and direction so you can be a voter advocate on election days. Fill out our two-minute survey to get involved.
GET STARTED →
Or, chip into our voter protection fund »

Democrats will not defeat Donald Trump or flip the Pennsylvania legislature unless thousands of Pennsylvanians stand up, fight back, and engage their fellow voters one on one.

We’re investing all we’ve got into building the biggest and most organized volunteer army Pennsylvania has ever seen.

More Organizers in More Places
Months before a presidential nominee’s chosen, at least thirty full-time field organizers will be working across Pennsylvania, putting PA Dems’ ground game months ahead of its 2016 pace.

What’s more, we’re opening offices in small towns, rural farm communities, and purple suburbs that may previously have been glossed over. Every county, every community, and every vote is in sight.

Getting Out the Youth Vote
In partnership with the PA Young Democrats and PA College Democrats, we’re registering, organizing, and mobilizing thousands of young Pennsylvanians on college campuses and social media.

Meanwhile, we’re working with the 2020 Organizing Corps to train Pennsylvania college students into the next generation of Democratic campaigners.

Months before our candidates are chosen, we’re already putting in work to turn Northwest PA #BackToBlue.

New Tools for Taking Action
To build the biggest volunteer movement in state history, we’re making it easier and more accessible to take action. A suite of new tools—like Mobilize, SMS, and digital training resources—are rolling out to boost volunteer recruitment at the state, county, and local level.

Stronger, More Secure Data
We’re making innovative investments in our voter database to better understand who Dems have talked to, who supports us, and who we need to win over.

JOIN A BACK TO BLUE KICKOFF

An operation of this size and complexity—even one powered by people—requires massive financial investment. And unlike the Republicans, PA Democrats aren’t relying on moneyed interests and ultra-wealthy donors.

To put our victory plan into motion, we need thousands and thousands of Pennsylvanians to chip in $5 or $10 or $20. Can you invest today to turn PA Back to Blue in 2020?

If you’ve saved your payment information with ActBlue Express, your donation will be processed immediately:
DONATE $8DONATE $20.20DONATE $43DONATE $100DONATE $250OTHER

There are three easy and convenient ways to vote in Pennsylvania this fall—by mail, early in-person, or on Election Day!

Request your ballot or make your plan to vote in person through the PA Dems' Voting Center.
or request your mail-in ballot now...